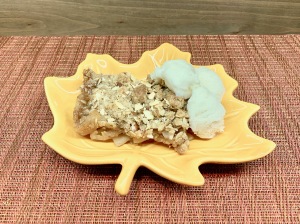 Happy National Dessert Day, everyone! Although I often feel that every day should celebrate dessert. And when the leaves are starting to change, as they are near my home right now, I think we should celebrate fall as well. In addition, it’s apple season and I procured local apples for my creations. So, where am I going with all of this? Apple crisps – my inspiration for today’s recipe.

It seems that everyone has a recipe for apple crisps, including me (see my Ginger Apple Crisp). But I wanted to take the recipe in a different, crispy-er direction. To achieve this, I scoured the internet and all of my many cookbooks. Ultimately I ended up at America’s Test Kitchen, the resource who does hours after hours after hours of testing for you. They found that if the topping is added after an initial apple cooking, then the top stays crispy. I took this hint, and my 20 pounds of apples (yes, you read that right), and crisped away.

When I decided to make a very large tray of the treat to make a dent in my crate of apples, my hubby’s reply was, “Apple crisp for breakfast, lunch, and dinner!” That required peeling a lot of apples. (Maybe I should have had him peel them). If you don’t want to do quite that much work, or if the recipe seems too large for you, then you can halve the ingredient amounts and make your crisp in an 8 x 8” pan.

For the topping: Place oven rack in middle position and heat oven to 400F. Toast almonds until lightly browned, then place on a wire rack to cool slightly. Leave oven on for filling. Working in batches, grind topping sugar in a spice grinder until fine and powdery. Whisk ground sugar, melted margarine, cinnamon, and salt together in a large bowl. Using a rubber spatula, fold in flour and oats until mixture resembles a cohesive dough. Add in almonds and stir to combine. Cover with plastic wrap and refrigerate.

For the filling: Toss fruit, filling sugar, lemon juice, arrowroot, cinnamon, and salt together in a bowl. Transfer to a 9 x 13” baking pan, cover with foil, and set on a foil-lined rimmed baking sheet. Bake until apples are juicy and tender, about 1.25 hours, rotating sheet halfway through baking.

lots and lots of peeled apples and pears

To assemble: Remove filling from oven and stir to redistribute juices. Take topping from the fridge and crumble it over the filling, leaving a few 1/2” topping pieces. Bake uncovered until filling is bubbling and topping is a deep golden brown, about 15 minutes, rotating sheet halfway through baking. Transfer to a wire rack and let cool 20 minutes before serving. Top with vegan ice cream, if desired.