After going through months of intensive baking in pastry school, I swore off baking for a bit. I needed a breather, yet I still heard the siren call of my all purpose flour. What could I make with flour that didn’t require baking in the oven? And was there something easy enough to create that wouldn’t burden my overtaxed baking skills?

My search first uncovered recipes for bread that could be made in a skillet. (Technically still baking, but not in the oven). But I didn’t want to fuss, so that omitted yeast and repeated kneading. Then I discovered a recipe for naan that is leavened with baking powder so it is easier to make than your average bread.

I should back up here for a minute. Admittedly, before going to school I never would have used “easy” when describing bread making. I’m not the type that considers kneading or rolling dough out to be fun or relaxing. So I was quite surprised with myself when I became interested in making bread. Going through school gave me the confidence to attempt anything baked, and I found that naan can be easy. In the end it was very rewarding to make my own bread, and veganizing it was only a matter of using vegan yogurt instead of traditional. Now I can add “bread making” to my list of accomplishments.

In a small bowl, place yogurt, baking powder, and 1/2 cup warm water. Stir and set aside for a few minutes. In a large bowl, combine flours, baking soda, and salt. Add yogurt mixture and remaining water. Knead to make a semi-soft dough. Once everything comes together to form a smooth dough, place it in an oiled bowl and cover with a damp towel. Transfer it to the fridge to rest for 30 minutes.

Place a cast-iron pan over medium-high heat and get it really hot. Divide the dough into nine pieces. Using one piece of dough at a time, while the rest remains in the bowl covered with the damp towel, roll it out to 10” on a lightly floured surface. Sprinkle with a few seeds, if desired, and roll again so they stick to the dough. Put naan on hot griddle and let it cook for about 1 minute. When you see a few bubbles on top, turn naan over and cook the other side, 2-3 minutes total. Makes 9 naan.

This week I was inspired by my hubby’s favorite Sunday breakfast — maple syrup dotted chocolate chip pancakes accompanied by an espresso drink. So for his tastebuds, and for yours, I sought out a chocolate chip quick bread to easily recreate the experience. The recipe I found was sweetened with maple syrup that echoes his syrupy pancakes. Then I decided that a coffee drizzle would really elevate the bread by combining chocolate and coffee. Hubby’s favorite flavor after chocolate is coffee, so the bread was a success.

To account for high altitude I made several changes. For better structure boosted by the extra protein in all purpose flour, I chose that type of flour instead of the pastry flour called for in the recipe. I also added a bit more flour for altitude. Next I reduced the baking powder and increased the baking soda for a bread that never fell, despite the high altitude. The original recipe was for a fruit bread so I easily exchanged chocolate chips for the fruit. I also added vanilla extract to enhance the chocolate chip taste and add moisture. This tea bread turned out beautiful and delicious.

Transfer the batter to the two mini loaf sections. Bake for 32-35 minutes, until an inserted toothpick comes out with just a few crumbs. Cool the loaves on a wire rack for 10 minutes, then allow them to fully cool. Once cool remove the bread by running a knife around the sides of the bread and inverting the pan onto a wire rack. Next flip the bread right-side up onto a plate.

For the glaze, whisk together the powdered sugar, 1 tablespoon milk, and coffee extract in a small bowl. Drizzle the glaze over the bread once the bread is completely cooled.

Occasionally I decide to jump into the deep end and bake gluten-free. Gluten-free baked treats are difficult enough to make well, but when they are also made vegan at high altitude then they can spell disaster. But, a friend said she missed cinnamon rolls so I was on a mission.

The recipe I found was for a vegan cinnamon bread so I tried it but with high altitude alterations. The problem was that I didn’t like the gummy texture so often found in gluten-free baked goods. I also had a new bundt pan I needed to break in, so I scaled the measurements up to fit the larger pan. The cake version was not gummy, helped by the fact that I split the apples up and put one in the batter and one in the topping. The cake turned out very elegant. Oh, and it was tasty … very tasty.

Just in time for Sunday brunch – I needed bread that would go great alongside eggs and mimosas. Strawberries are available everywhere so they were my first choice to flavor a bread. A short search of my files revealed a recipe for a vegan quick bread that incorporated these lovely berries.

For altitude I reduced sugar and baking soda. I added milk, although there was none, to help with dryness at altitude.To make it a little healthier, I took out some regular flour and put in whole wheat. The last change was substituting ginger for cinnamon, but that was merely to please my own taste buds. Add vegan cream cheese and fresh strawberries to a slice, and you’re set. 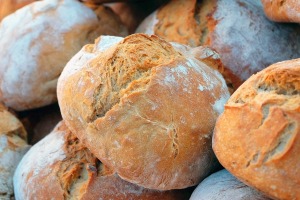 Yeast scares me. When a recipe includes yeast it also includes hours of time until you actually get to eat. Instant gratification is much better. I can go from gathering ingredients for cookies to eating them in less than 1/2 hour. But I understand that many people love the meditative qualities and joy of baking bread. In order to help those bakers out, I have delved into the science of bread baking at high altitude.

According to Taste of Home, “High altitude (over 3,000 feet) affects bread baking because the lower air pressure allows the yeast to rise 25 to 50 percent faster, and the drier air makes the flour drier. If the dough over-rises, the results might be a heavy, dry loaf or misshapen or collapsed loaf.” The lower air pressure and dryness affects all baking but may have a more drastic effect on bread. I would eat a dry chocolate cookie, but dry, leaden bread … never!

Cultures for Health includes other specifics that affect high altitude bread baking, including adjustments to time. Increasing baking time is important. “The amount of extra time depends on the exact elevation. The easiest way to judge when a loaf of bread is finished baking is to use a thin-tipped instant-read thermometer inserted into the bottom of the loaf. A temperature of 195°F is a good goal, but temperatures all the way up to 205°F should be fine.”

They mention that proofing time should also be changed. “Rising time decreases as altitude increases. Keep in mind that the longer the rise time, the more complex the flavors will be, usually a desirable goal. Try rising at cooler temperatures and giving the dough a second rise. When the dough has doubled, punch it down and let it double again.”

These all seem like good tips to ensure a beautiful loaf of bread. I’ll stick with quick breads for now, but I’m hoping my favorite taste tester can use these recipes to create his perfect cinnamon roll. I look forward to being his taste tester. 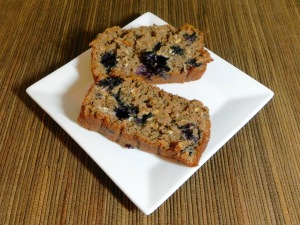 Quick breads are so nice to make on a lazy Sunday afternoon. Whether you are having brunch or just want the house to smell delicious, they are a comforting baked treat. The other great thing about them is that you mix one up and pour it into a pan with no fuss, no decorations or frosting to make, and they easily feed a crowd.

The recipe I found required a few changes. I used some all-purpose flour in place of whole wheat to lighten it up, and I swapped wheat bran for the wheat germ because that is what I had in the cupboard. Then, for high altitude adjustments, I added a bit more flour and used less baking powder. To veganize the recipe I used non-dairy yogurt and then switched out the eggs with aquafaba. That was easy. The hard part was waiting what seemed far too long for it to cool so I could eat it.

I have wanted to bake the Date-Nut Bread from the Ranch House Restaurant in Ojai, CA ever since I first tasted it. At the time I didn’t even like dates, but this quick bread was pretty decadent. Sweet, moist, and great slathered in butter. The cookbook from that restaurant has been collecting dust on my shelf for many years, so it was finally time to conquer it.

The original recipe is neither vegan nor high-altitude and has a few quirky directions. It took me several tries to come up with a bread that not only tasted (and smelled) fantastic but also had the right texture. I did a few basic veganisms – oil for butter and tofu for egg. I added in some whole wheat flour to make it more healthy, while adapting for altitude by using regular baking powder instead of double-acting.

There is one step I didn’t change. It says to line the bread pan with brown paper. Just do it. I was using a non-stick pan so I thought I only needed a light oiling of the pan – it was a bad idea. The bread cooked perfectly except around the outside where it remained gooey and refused to release from the pan. I got smart on the third attempt and used lightly greased parchment paper. Some directions were written to be followed exactly.

Date Nut Bread adapted from Vegetarian Gourmet Cookery by Alan Hooker
5 ounces chopped pitted dates
3/4 cup boiling water
1 cup all-purpose flour
1 cup whole wheat flour
1 1/4 tsps baking soda
1/2 tsp baking powder
1/2 tsp salt
1/4 cup blended silken tofu
1 1/4 cups vegan sugar
2 1/2 TBS vegetable oil
1/4 cup almond milk
1 tsp vanilla extract
1 cup chopped walnuts
Preheat the oven to 350F. Prepare a mini loaf pan by cutting parchment paper to fit three of the four sections. Lightly brush the pieces of paper with shortening and insert the paper into each of the three sections. The fourth section will not be used.
Put dates in a bowl and pour boiling water over them. Let sit for 10 minutes. Meanwhile, sift together the flours, baking soda, baking powder and salt. Combine the tofu and sugar in the bowl of a stand mixer. Add the dates with their water, oil, milk and vanilla and beat again. Blend in the flour mixture in two batches. Add in the walnuts and mix well.
Divide the batter between the three prepared sections of the loaf pan. Bake for 33-35 minutes, or until the tops rise up and crack a little. Remove loaves from pan and place on a rack to cool.