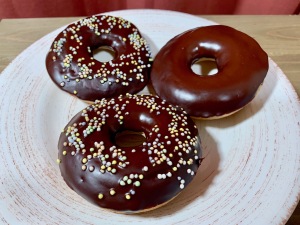 In the past I have made several failed attempts at baked doughnuts. I was certain the fault was with me or the fact that I was at high altitude. The doughnuts had dense textures and were better suited as doorstops. Frustrated, I gave up. But recently I found a new recipe and bravely decided to try again. Am I glad I did. I got perfect, beautiful, and tasty doughnuts.

The recipe I used was already vegan, so all I had to do was make minor high altitude changes. I added almond milk and then baked them a little longer. That was all that was needed for my success. They are delicious plain, but I had leftover ganache in my freezer that I melted to dip my doughnuts in. You can drizzle melted chocolate on these treats, or decorate them with buttercream and a few sprinkles. The beauty of doughnuts is that they can be topped with a multitude of tasty things that you probably already have in your fridge or cupboard.

Place batter into a piping bag or ziplock bag with the corner cut off. Pipe evenly into doughnut wells. Bake for 16-17 minutes until lightly browned on top. Remove from oven and let cool for a few minutes on a wire rack. Then tip doughnuts from pan and place on a wire rack until completely cooled.

Place a wire rack over a piece of waxed paper. Dip doughnuts into melted ganache, then put on wire rack. Shower tops of doughnuts with sprinkles, then set aside for the topping to set. While waiting, you can snack on the chocolate and sprinkles that have fallen onto the waxed paper.

After going through months of intensive baking in pastry school, I swore off baking for a bit. I needed a breather, yet I still heard the siren call of my all purpose flour. What could I make with flour that didn’t require baking in the oven? And was there something easy enough to create that wouldn’t burden my overtaxed baking skills?

My search first uncovered recipes for bread that could be made in a skillet. (Technically still baking, but not in the oven). But I didn’t want to fuss, so that omitted yeast and repeated kneading. Then I discovered a recipe for naan that is leavened with baking powder so it is easier to make than your average bread.

I should back up here for a minute. Admittedly, before going to school I never would have used “easy” when describing bread making. I’m not the type that considers kneading or rolling dough out to be fun or relaxing. So I was quite surprised with myself when I became interested in making bread. Going through school gave me the confidence to attempt anything baked, and I found that naan can be easy. In the end it was very rewarding to make my own bread, and veganizing it was only a matter of using vegan yogurt instead of traditional. Now I can add “bread making” to my list of accomplishments.

In a small bowl, place yogurt, baking powder, and 1/2 cup warm water. Stir and set aside for a few minutes. In a large bowl, combine flours, baking soda, and salt. Add yogurt mixture and remaining water. Knead to make a semi-soft dough. Once everything comes together to form a smooth dough, place it in an oiled bowl and cover with a damp towel. Transfer it to the fridge to rest for 30 minutes.

Place a cast-iron pan over medium-high heat and get it really hot. Divide the dough into nine pieces. Using one piece of dough at a time, while the rest remains in the bowl covered with the damp towel, roll it out to 10” on a lightly floured surface. Sprinkle with a few seeds, if desired, and roll again so they stick to the dough. Put naan on hot griddle and let it cook for about 1 minute. When you see a few bubbles on top, turn naan over and cook the other side, 2-3 minutes total. Makes 9 naan.