Chocolate is good for you. Lucky for us bakers! Where baking recipes are involved, chocolate can be added in the form of chips, bars, nibs or powder. Generally it’s easy to figure out which form to use, but on a trip down the baking aisle you can find the powdered version as cocoa and cacao. What’s the difference?

Julie Morris, Navitas Naturals Executive Chef, explains on their blog. “Cacao is the raw form of chocolate. It comes directly from the cacao tree, which fruits colorful pods that are filled with large cacao seeds, called cacao beans. When these beans are ground up finely, cacao powder is the result…Cacao powder is unadulterated pure chocolate (while) cocoa refers to processed cacao… (Both) taste similar: like unsweetened chocolate.”

Because the taste is similar, I choose cacao for its health benefits. Cacao is minimally processed so it retains its beneficial antioxidants. Also, it “may be packed with brain-boosting compounds” called flavonols. So, eating that second piece of cake will make me smarter.

After eating more chocolate, my brain was spurred to gain other knowledge. You’ll see some recipes calling for cocoa powder that specify “Dutch-process.” Is this the same as “natural” cocoa powder? Food52 explained: “Natural (non-alkalized) cocoa powder is pure roasted cocoa beans — with most of the fat removed — ground to a fine powder. With all of the flavor but a fraction of the fat, cocoa powder is … bitter and strong. Dutch-process or alkalized cocoa is chemically processed to reduce the acidity and harshness of natural cocoa (which then) alters the flavor of the cocoa and darkens the color.”

Research on Wikipedia revealed that taste isn’t the only difference between the cocoa powders. Dutch process cocoa is not acidic like natural cocoa so “it cannot be used in recipes that use baking soda as the leavening agent, which relies on the acidity of the cocoa to activate it. Rather, Dutch process cocoa can be used in recipes that use baking powder (instead of baking soda) for leavening.” I also learned that the Dutch processing was, indeed, invented by a Dutchman. In case you were wondering.

All this talk of chocolate is making me hungry. I’m going to go snack on a few squares of healthy dark chocolate. I’ll worry about baking later.

On this summer solstice, strawberries are sweet and fresh and make a perfect dessert. A cheesecake would make a beautiful way to present them, or so I thought. I tried several types of recipes – entirely raw, with a cashew cream base, with macadamia nuts – and none of them turned out quite right. I couldn’t get textures and flavors that were reminiscent of a classic cheesecake. Admittedly I had never made a cheesecake before, vegan or not, but I didn’t think it should be this hard.

After much trial and error, which included a gummy dessert that was inedible, I decided to combine the parts of recipes that I liked to make the perfect whole. I chose a baked crust that added hemp seeds for a change of taste and then combined it with a strawberry cheesecake recipe where I replaced vegan items for their non-vegan counterparts. With a few more minor tweaks, including more flour for altitude and blueberries as a colorful garnish, I achieved a cheesecake worthy of a summer celebration.

Summer Celebration Strawberry Cheesecake adapted from a Hemp Hearts Crust and a Strawberry Cheesecake
CRUST
1 1/2 cups + 2 TBS almond flour
1/2 cup hemp seeds, lightly crushed
scant 1/2 tsp sea salt
1 tsp cinnamon
5 TBS coconut oil, melted
2 TBS agave nectar
STRAWBERRY TOPPING
1 pound fresh or frozen strawberries, washed and stemmed
1/4 cup vegan sugar
1/2 vanilla bean, split lengthwise and seeds scraped
1/4 oz vegan gelatin, strawberry flavored or unflavored
CHEESECAKE
1 pound vegan cream cheese, softened
1/2 cup vegan confectioners’ sugar
1 tsp vanilla extract
1 1/4 cups strawberry topping (see above)
1/2 cup soy creamer
blueberries for garnish
For crust: Preheat oven to 350. Whisk together almond flour, hemp seeds, salt and cinnamon. Stir in coconut oil and agave nectar. Using your hands, spread mixture into a greased 9” springform pan. Flatten using the bottom of a glass. Bake for 12-13 minutes, until golden brown along the edges. Set aside to cool.
For strawberry topping: In a pot, add strawberries, sugar, vanilla bean pod and seeds and 2 TBS water. Cook over medium heat until strawberries are soft. Remove vanilla bean pod and use an immersion blender to puree the fruit. Sprinkle gelatin over 2 TBS cold water in a small bowl. Allow it to sit for 2 minutes. Transfer gelatin to the strawberries and gently cook over low heat, whisking just until gelatin is completely dissolved. Remove from heat. Reserve 3/4 cup strawberry mixture for the cake top.
For cheesecake: In a stand mixer, beat cream cheese and sugar on medium-low speed with paddle attachment until smooth. Add vanilla extract. Add strawberry topping, except reserved 3/4 cup. In a separate bowl, whisk creamer. Replace stand mixer attachment with the whisk attachment. Add creamer to cheesecake batter and whisk until it is all combined. Pour cheesecake into prepared pan. Tap pan gently on counter to bring any air bubbles to surface. Let it sit, uncovered, in refrigerator for 2 hours or until it is set to the touch. Once cheesecake is set, pour remaining 3/4 cup strawberry topping over it. If the topping has set up in pot, gently heat it for a minute, just until it is pourable. Place the cheesecake back into the refrigerator and allow to set, uncovered, for another 30 minutes, or until the topping is set. Decorate with blueberries. At this point it is ready to serve or you can cover the cheesecake with plastic and it can sit in the refrigerator for 24 hours. Before unlocking the springform pan, run a knife around edge of the cheesecake to loosen it. 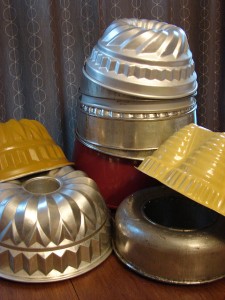 When I first moved to high altitude I noticed that baked goods seemed to sink at the center – not just vegan, but all types. I also realized that the larger the baked item (i.e. a cake versus a cupcake) the larger the crater. That made me think that if you removed the center then you could, potentially, remove the crater. The conclusion was that I would have to start baking in different pans to make better looking and more evenly baked goodies.

I started working with bundt pans for a centerless cake. Using a chart for Baking Pan substitutions I took a cake recipe for an 8 x 8” pan and baked it in my bundt pan. I started with a shorter baking time and checked every 5 minutes until it was done. Success! I had a perfectly baked cake with a great look.

Next was applying the same logic to quick breads. If I used mini loaf pans instead of a regular sized loaf pan then I should get a good result. I divided up the batter and greatly reduced the baking time to account for smaller loaves. Checking every so often I found the perfect length of time to bake the breads, and I ended up with tops that didn’t resemble lunar landscapes. For a chart to help calculate changing loaf sizes and corresponding bake times, see Crafty Baking again.

Now I apply this concept to all my high altitude baking except drop cookies; they don’t rise much so they don’t fall and cause craters. After a bit of shopping, I have specially divided pans for bar cookies and smaller pans to bake cakes in. The only problem I have now is that my pans tend to cater to bite-sized eating and my husband misses layer cakes. I guess that’s a project for the future.

Now you know my secret to making beautiful baked goods at high altitude. 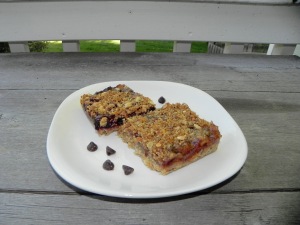 This recipe was inspired by a trip to the farmer’s market. I purchased several jars of unusual flavored jams but couldn’t figure out what to do with them. Then I decided that I could incorporate all of them as a distinct filling for oat bars.

I found a recipe that was already vegan, so I only had to add a few modifications. To increase flour for high altitude and give more protein for structure, I swapped out a small amount of flour for almond flour. For health benefits, I used coconut sugar instead of some brown sugar.

Now the fun began – playing with flavor combinations. I used 2 oz each of seedless marionberry, elderberry, wild cactus, and rose petal jams. When I added the marionberry and elderberry jams, I sprinkled only those flavors with chocolate chips. With the wild cactus and rose petal jams, I sprinkled them with cardamom before adding the topping. So grab all of those partially eaten jars of jam from the fridge and get started.

Fruit and Oat Bars adapted from Earth Balance Raspberry Lemon Bars
1 1/2 cups rolled oats
3/4 cups whole wheat pastry flour
3/4 less 2 TBS cup all-purpose flour
2 TBS almond flour
1/4 cup ground flax seed
1/4 cup light brown sugar, packed down
11 TBS vegan margarine, cold
8 oz jam, one or several flavors
1/4 cup sliced almonds
2 TBS coconut sugar
1/8 tsp salt
3 TBS chocolate chips
Toast oats and almonds on separate pans in 350F oven for 8 minutes. Remove from trays to cool. In a food processor, pulse together cooled oats, flours, flax seed, brown sugar and margarine until just mixed and crumbly. Reserve 3/4 cup of crust mixture and press remainder firmly into the bottom of an 8 x 8″ pan that has been lined with non-stick foil. Bake at 350F for 15 minutes.
While the crust is baking, warm jam in a hot water bath made by heating a small amount of water in a large pan and gently warming the jars of jam. When the crust is out of the oven, spread sections of jam across the crust. To make the topping, pulse the toasted almonds in a food processor along with the reserved crust mixture, coconut sugar, and salt. Sprinkle topping and chocolate chips over jam and press to adhere. Bake at 350F for 25 minutes or until filling is bubbling and topping is browned. Place on a rack and cool completely. Use foil to remove from pan and slice into bars. Store in an airtight container.