The Doctor and The Chef demo at Vegan Dairy Fair

Another Vegan Dairy Fair wrapped up yesterday in Boulder, Colorado. This tasty event, an educational project sponsored by Dale Ball and Bleating Hearts Sanctuary, offered the chance to sample plant-based dairy creations. While snacking on non-dairy ice cream, yogurts, and dips, I learned why these food choices are important to humans and animals.

The fair also provided cooking demos – my personal favorite part of the day (yes, I got new recipe ideas for the blog). First up were Mark Reinfield and Ashley Boudet, ND of The Doctor and The Chef. Mark regaled us with vegan jokes and demonstrated recipes from their new book, “The Ultimate Age-Defying Plan.” Mark showed how to make the delicious concoctions with Ashley reporting on the dishes’ nutritional highlights. Not only did I get to eat, but I was shown why the options chosen were good for my health. Win-Win!

Then it was time to check out the vendors with food selections from national companies as well as local businesses. From this showcase of sweet and savory snacks, I enjoyed cheese sauces, non-dairy milks, and caramels. But having tried and failed to make vegan donuts myself, my hat heartily goes off to Rustic Donut who bake a scrumptious donut that is not only vegan but also gluten-free.

The last cooking class was given by vegan mentor Kathy Peters, who made a versatile and yummy Vanilla Pastry Cream. She also gave instructions on how to use various non-dairy ingredients in vegan desserts. Her joy of vegan food preparation obviously spills out onto her family because they each had a part in her presentation. That seemed to be a thread that ran throughout the day – one of including friends and family while you honor your health and that of the animals and the earth. 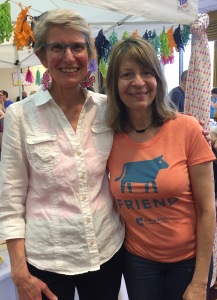 Yesterday I had a great time eating and learning at the Vegan Dairy Fair held in Boulder, CO. There weren’t many baked treats, but I wanted to share the event with you because it was an afternoon of vegan fun.

The fair, touted as a totally plant-based celebration, was filled with vegan milk, cheese, yogurt, dips, dressings, ice cream, and confections. It occurs on the Saturday before Mother’s Day, “to honor mothers of all species.”

There were samplings from so many vendors that I was glad I showed up hungry. I tried vegan cheeses from Kite Hill, Follow Your Heart, Peaceful Rebel Cheese, The Honest Stand, and, my personal favorite, Miyoko’s. The food choices also included ice cream, candies, alternative milks of all kinds, dips, yogurt, and cupcakes. A Mac ’n Cheese Taste-off gave me the chance to try out a few prepared macaroni and cheese selections and donate to a good cause.

I was not able to attend all of the cooking demonstrations (I was busy eating!), but I thoroughly enjoyed JL Fields class on Pressure Cooking. She’s a delightful presenter with a ton of energy, information, and humor. JL prepared risotto in about 15 minutes which is amazing, considering my definition of risotto is “the dish that takes four hours to make.”

The event, organized by Bleating Hearts Sanctuary, Dale Ball, and Peaceful Prairie Sanctuary, is an educational project held “to represent those we believe to be the most important reason to choose vegan dairy – the cows, the chickens as well as all animals.” They ask that people keep in mind “that the fair is held on behalf of those whose lives depend on our switch to a vegan lifestyle.” I left with a renewed respect for animals, but also as a desire to make my own vegan butter thanks to inspirations and ideas from JL and Veganize Everything.