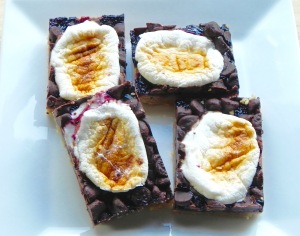 Don’t you just want to reach through the picture and grab one of these? Yes, they are that good. But I digress. Last week’s American holiday barbecues had me dreaming of S’mores. During the summer I do become infatuated with that wonderful combination of chocolate, marshmallow, and graham crackers. But I needed to find a way to make them less messy and more decadent. Enter – baked s’mores.

The recipe I found was already vegan so no changes were necessary on that front. The bars didn’t need high altitude tweaking either. What I altered was to make them more decadent by adding a layer of raspberry jam. This did make them sweeter so only one square is necessary for melty marshmallowy chocolatey bliss.