If you have searched through my blog archives, you will see that I have been writing posts for quite some time. I began by adapting my favorite baked recipes through trial and error —countless trials leading to many errors. There were tips I tried and suggestions that I followed. Many of the strategies were used multiple times and in varying recipes. All of these experiments led to my becoming wiser and my belly getting fuller.

After time I learned to understand my altitude, my oven, and even the brands of products that I used in baking. Each variation had subtle differences that I would not have experienced had I not gone exploring. Sometimes cracks in the surface of a baked good would appear, other times cracks would go away. With some recipes I created a good item, and with other recipes I created real winners. But, my approach to baking always included a bit of guesswork along with the mathematical conversions. So, I decided to up my game.

For the past few months I have been taking an online vegan dessert class at Rouxbe Culinary School. The students are taught the fundamentals of the how and why of dessert creation. We are given basic instruction in the ways of a pastry cook, although I believe I am currently the only one dealing with high altitude. Fortunately I have baked enough at higher altitudes that I can put my spin on my assignments.

What does this mean for you, my hungry reader? My recipes will be more refined as I will be armed with the knowledge I get from the class. I have learned to be more precise (Is dutch process cocoa or natural cocoa best in the recipe? Should a sugar be ground first?), and this will lead to recipes that are easier for you to replicate. My wish is that I can offer recipes that you can successfully enjoy.

Forgive me, but I must go now. I have a cake to bake for class …

The cookie monster reared its head, so I searched through my recipes for something new. I saw sugar cookies and ginger cookies and nut cookies, but knew the cookie had to have chocolate. And then my brain morphed a few ideas together and decided on chocolate mint.

The only consideration I had to take for high altitude was to add extra liquid for the dry atmosphere. I borrowed a bit from this recipe and then that, but I used vegan ones from the start so I didn’t have to make changes. After it all came together the scent of the dough reminded me of mint fudge. My kitchen smells like Christmas in July. 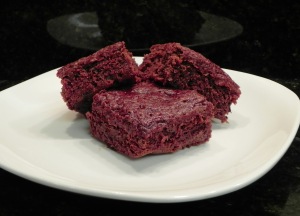 I have to say, I tried making brownies many times at 7000 feet and then at 5000 feet. From a mix. From scratch. Classic baking. Modern style. Still brownies always eluded me. I tried to veganize so many recipes but all I did was waste some quality chocolate. Then, I finally achieved success by using an already vegan recipe.

I decided, after about the fifth attempt, that altitude wasn’t my problem. Making a non-vegan recipe into a vegan one was the issue. Vegan butter substitute doesn’t act anything like milk butter. It’s made from oil and water and doesn’t hold a recipe together when melted as classic recipes dictated. My pan came out of the oven looking like it was filled with boiling toffee. So I tried unmelted vegan butter and still I failed.

The next problem, I reasoned, was using melted chocolate. My attempts were more like fudge than brownies. So I finally abandoned the classic brownie recipe I was trying to recreate. Instead I used a modern vegan version with cocoa powder instead of melted unsweetened chocolate. Success was mine.

So, what did I learn? You need eggs and butter to complete a brownie recipe that call for melting the chocolate and butter. And, sometimes it’s easier to adapt a vegan recipe to high altitude than it is to veganize an altitude-friendly recipe. Oh, and success tastes so good. 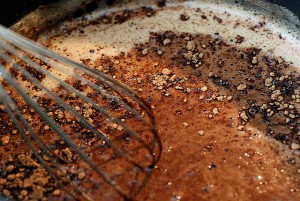 Chocolate is good for you. Lucky for us bakers! Where baking recipes are involved, chocolate can be added in the form of chips, bars, nibs or powder. Generally it’s easy to figure out which form to use, but on a trip down the baking aisle you can find the powdered version as cocoa and cacao. What’s the difference?

Julie Morris, Navitas Naturals Executive Chef, explains on their blog. “Cacao is the raw form of chocolate. It comes directly from the cacao tree, which fruits colorful pods that are filled with large cacao seeds, called cacao beans. When these beans are ground up finely, cacao powder is the result…Cacao powder is unadulterated pure chocolate (while) cocoa refers to processed cacao… (Both) taste similar: like unsweetened chocolate.”

Because the taste is similar, I choose cacao for its health benefits. Cacao is minimally processed so it retains its beneficial antioxidants. Also, it “may be packed with brain-boosting compounds” called flavonols. So, eating that second piece of cake will make me smarter.

After eating more chocolate, my brain was spurred to gain other knowledge. You’ll see some recipes calling for cocoa powder that specify “Dutch-process.” Is this the same as “natural” cocoa powder? Food52 explained: “Natural (non-alkalized) cocoa powder is pure roasted cocoa beans — with most of the fat removed — ground to a fine powder. With all of the flavor but a fraction of the fat, cocoa powder is … bitter and strong. Dutch-process or alkalized cocoa is chemically processed to reduce the acidity and harshness of natural cocoa (which then) alters the flavor of the cocoa and darkens the color.”

Research on Wikipedia revealed that taste isn’t the only difference between the cocoa powders. Dutch process cocoa is not acidic like natural cocoa so “it cannot be used in recipes that use baking soda as the leavening agent, which relies on the acidity of the cocoa to activate it. Rather, Dutch process cocoa can be used in recipes that use baking powder (instead of baking soda) for leavening.” I also learned that the Dutch processing was, indeed, invented by a Dutchman. In case you were wondering.

All this talk of chocolate is making me hungry. I’m going to go snack on a few squares of healthy dark chocolate. I’ll worry about baking later.