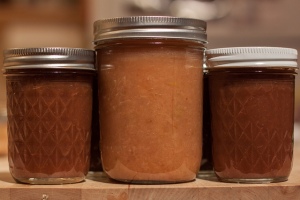 In keeping with my resolution to bake healthier, I have examined ways to reduce fat in recipes. Most eaters know that fat adds flavor, but it’s important to know what else fat does in baking in order to see how to reduce it.

Fats “main functions are to shorten or tenderise the product (and) to trap air during creaming and so … give good volume and texture. … It is important to add the correct amount of fat as too much … will make the baked product greasy … while too little fat will leave you with a product that lacks flavour and stales quickly.”

For a tender treat, you can sub pureed fruits or vegetables as many “contain pectin, which acts similarly to fat to ‘shorten’ or tenderize baked goods. Unsweetened applesauce, mashed bananas, pureed prunes, or canned pumpkin puree work best. … You can replace half of the fat in a recipe with an equal volume of pureed fruit or vegetable.” I find this trick works well in cupcakes, muffins and breads.

It seems that pureed fruits and vegetables are best used to make a tender crumb but not as a substitute in recipes that require volume added to the batter. For these instances I still rely on my vegan butter substitute. It’s great when a recipe calls for the fat to be creamed to trap air. However, a baked good can still be made with a reduced amount of fat by replacing half of the fat with pureed produce. For a successful reduced-fat recipe, try my Chocolate Chip Banana Bread.

As the year comes to an end, people think about things they should do to improve next year. I’ve never been a fan of New Year’s Resolutions because they are usually so absolute and stringent – I will exercise every day; I will be nice to people; I will write a best-selling novel. The pressure is incredible and often leads to disappointment. So, instead of making a black-or-white statement, my vow to myself (and to you) is that I will TRY to make healthier food.

When I tell others that I am a vegan baker, they usually respond with, “So it’s healthy, right?” My answer is not what they expect. “Even if it’s vegan it’s still a cupcake.” A cupcake, or cookie, or cake is still a baked treat and not health food. I have tasted healthy baked goods that reminded me more of dog treats, but I know that you can still have a bit of decadence that is somewhat healthier.

In the coming year I will attempt to make baked treats that are healthier. I will look at healthier fats or fat stand-ins when tweaking recipes. I will also include more whole grains, when feasible, and use less refined forms of sugar. And, I will occasionally throw in a veggie or two.

There, I said it. But I consider it a suggestion, not a steadfast rule. And that works for me.

Have a great New Year, and happy baking! 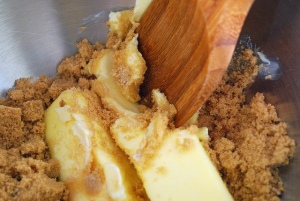 Image courtesy of Slice of Chic at flickr.com

When I started to bake vegan, I thought the easiest substituting would be for butter. Earth Balance makes a vegan margarine and it seemed to be an easy swap. It looked like butter and acted like butter until I tried to bake brownies with melted margarine and made a chocolate blob. Then I realized that all fats are not butter.

Butter adds not only flavor to baked goods, but also texture. “Liquid oils can sometimes work in place of solid fats, though your end product might be a bit oiler. Coconut oil is solid at room temperature, though a bit more solid than butter or shortening, so you might not get that flaky texture. … (And there’s) naturally fatty ingredients like avocados and nut butters.” I discovered recipes for brownies made with nut butters, and now I know that they can be the fat source.

After the brownie debacle, I searched for tricks with substituting fats. King Arthur Flour reports that “if you’re looking for a dairy-free fat substitute … choose a fat that most resembles the one used in the original recipe. For example, a recipe that calls for butter would be best made with a vegan butter substitute. For a recipe made with vegetable oil, you could use coconut oil in its place.” They tested this theory in a cookie recipe. Their favorite fat was butter, but I think that might be because it is considered the norm. Their next choice was vegan butter. They concluded that “since vegan butter was … soft at room temperature, we were able to easily beat the fat and sugar together (to help) keep the cookies light. The dough … was a little soft (and) when scooped onto the baking sheet, the cookies didn’t hold their shape. … These were a bit cakier and less chewy (but) the edges were crisp and golden brown, while the centers remained chewy and soft.”

So I learned how to make a great cookie, but was still stumped on what went wrong with my brownies. I got a hint on Earth Balance’s website. They recommend: “To achieve a rich, spongy texture in cakes and quick breads, don’t skimp on the creaming step. Beat sugars with Buttery Sticks … just as you would butter, until the sugar aerates the fats and creates a fluffy batter that will give loft.”

Here was part of my problem – my brownie recipe called for melted butter so I could not beat it with the sugar until creamy. I think when that was combined with the fact that the recipe had no leavener, then I was stuck with brownies with no lift at all.

Although there are several choices for fat substitutes, they are not created equal. If you can cream the butter substitute with sugar to aerate it you will get the best results in recipes calling for butter. Or you can experiment with other fats. Or you can follow one of my recipes and leave the heavy lifting up to me.

During National Vegan Cookie Month, I baked a lot of cookies. I experimented with different ways of preparation and baking, and I discovered something amazing – Cookie Scoops do make a difference.

While making a batch of cookies, I had only enough dough at the end to make a few so I rolled them by hand instead of scooping them. They were baked the same amount of time as the others but they turned out drastically different. They spread more making them crunchier and, frankly, they were uglier.

I should reveal that I have used scoops only occasionally in the past; they just seem too fussy. And I never drop cookies from spoons because of the awkwardness. Generally I roll the cookies into balls with my hands and flatten them slightly once on the cookie sheet. I didn’t realize that there is an art form and a science to using cookie scoops until I did some research.

Upon visiting King Arthur Flour’s website, I discovered an article on using cookie scoops for drop cookies (i.e. chocolate chip, peanut butter, oatmeal). First off, the baker compares using a teaspoon cookie scoop to using a regular spoon and says, “The finished cookies include some that aren’t perfectly round; but they look pretty good. Unlike my spoon-scooped cookies, the cookies are all basically the same size.”

The baker also notes that using a cookie scoop saved time and kept the baker’s hands clean. Plus, scoops come in various sizes so you can choose from bite-sized to huge. This gave me insight into the benefits of using a scoop, but I didn’t get an explanation on why my cookies spread until I delved deeper.

I moved on to an article discussing cookie spread. “(Why) does baking temperature affect cookie spread? Because the fat in cookies is a big part of their structure, prior to baking. Scoop the dough onto the baking sheet, and the fat is at least partially responsible for them holding their shape.” I thought about oven temps and realized that the temperature of my hands became a factor in how they baked. My hand heat must have started to melt the fat and caused them to lose shape before they even hit the oven.

So, what did I learn? That cookies are finicky!! For a perfect looking cookie, baby the dough by using a cookie scoop instead of your hands.