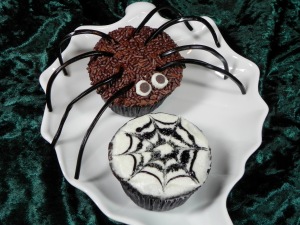 Halloween is a fun time for everyone, not just kids. It offers a chance to go crazy with baked items. But I got so preoccupied researching creative designs that I decided to make life easy and adapt my recipe for Chocolate Coffee Cupcakes. This post is about the designs.

The star of the show is the spider, but I had to make an entire batch of white frosting so I could make eyes. What was I to do with the rest of the frosting? Make a matching spiderweb. This was achieved by placing a flat layer of white frosting on the cupcake and then drawing three concentric circles with melted chocolate. A toothpick was then drawn through the circles to create the web. Cool, right?

To ensure that everything was vegan, I made the eyes myself. To save time you can buy candy eyes, but check the ingredients. Now, for the spider…

4 comments on “Spider Cupcakes for Halloween”