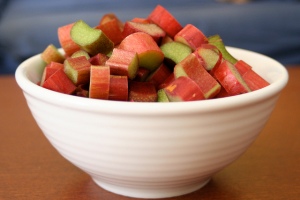 Image courtesy of Whitney at flickr.com

In my blog on Strawberry-Rhubarb Crumble I mentioned that I had to scour the internet to do research for the post. I was only briefly familiar with rhubarb and needed to learn more in order to make a tasty treat. SeriousEats.com told me that “rhubarb—technically a vegetable, but usually treated like a fruit (is) … puckeringly tart when raw (and) is especially tasty when its sourness is tempered through cooking with sugar and/or pairing with sweet fruits … Note: Only the stalks of rhubarb plants are edible, while the leaves are poisonous.”

Once I got the info on the rhubarb plant, I went off in search of ways to bake it. I saw a multitude of recipes labeled “crumble” or “crisp” that looked like the same type of recipe. They are almost identical, but a little detective work uncovered their differences. “Crumbles and crisps are very similar … They both contain fresh fruit with a streusel-like topping that gets baked until the fruit is cooked … The original difference between the two lay in the streusel topping: crisps would contain oats and crumbles would not. In an actual crisp … the oats in the topping crisp up as it bakes, hence the name.”

At that point I had enough data to start my baking experiments. Strawberry was often paired with rhubarb so that was a good place to start. Also, it’s strawberry season and fresh berries were plentiful. I ended up with a crumble and not a crisp because it seemed easier, and who doesn’t like dessert to be simple. Next I threw in a little “healthy” and my Strawberry-Rhubarb Crumble was born.